eXtension is an interactive learning environment delivering the best, most researched knowledge from the smartest land-grant university minds across America.
Find a U.S. Institution


Goats Home
Have a question? Try asking one of our Experts

Have a specific question? Try asking one of our Experts

Unlike most other resources on the web, we have experts from Universities around the country ready to answer your questions.
View publishing information about this page.
This resource area was created by the: Goats community

Ask an Expert Connect with experts from Universities across the country

In This Resource Area

View this page: http://www.extension.org/pages/27530/goat-glossary-of-terms
Posted by Amber Waves at 5:39 AM Links to this post 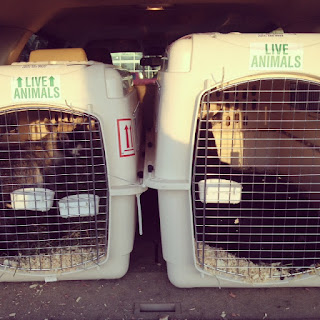 Congratulations Lisa Burke on your recent purchase of a silver agouti buck and bred doe!
Picture above shows arrival
Posted by Amber Waves at 9:12 AM Links to this post

on May 29 in AGF Activities, Industry News, News, News Releases
Provided by:
Diane L. Sutton
National Scrapie Program Coordinator
National Center for Animal Health Programs
Veterinary Services
It has come to our attention that some goat registries are allowing the use of RFID implants for registry purposes that are not compliant with ISO standards 11784 and 11785. These standards require RFID implants for animals to be 15 digits including a 3 digit country or manufacturer code and to read at 134.2 kHz. While APHIS does not regulate what registries may use to identify goats for registration, it does determine what devices can be used for official identification. In order for a registered goat identified with an RFID to move in commerce without any other form of official identification, such as an eartag, guidance provided by APHIS in 2011 specified that:
1. Implants need to comply with the above ISO standards in order to be used as official identification,
2. Animals officially identified with implants must be accompanied by a copy of their registration certificate on which the RFID number is recorded, and a reader that can read the implant in the animal.

This guidance has been updated and is attached. It is also available online at: http://www.eradicatescrapie.org/Educational%20Resources/pdf/EID_microchip_as_official_ID.pdf
Rather than disrupt stakeholder activities, APHIS has elected not to enforce the requirement that an implant be ISO compliant in order to be used as official identification until March 11,2014. This decision is consistent with the new traceability rule requirements for horses.
This means that any implant applied after this date not compliant with ISO standards 11784 and 11785 (15 digits includ ing a 3 digit country or manufacturer code and readable at 134.2 kHz) will not be acceptable as official identification. Further, any implants applied after March 11, 2015 will have to have the 840 country code, rather than a manufacturer code, in order to be used as official identification and will have to be approved by APHIS for use in goats.
Implants applied before these dates will be acceptable as official identification for the life of the animal as long as the other requirements are met.  A list of approved 840 implant and official eartag manufacturers is maintained at:
http://www.aphis.usda.gov/animal_health/animal_diseases/scrapie/approved-tag-co.shtml
Posted by Amber Waves at 8:39 AM Links to this post 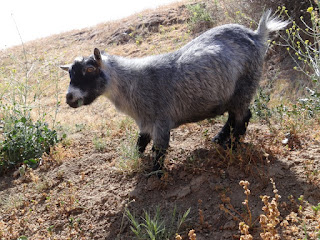 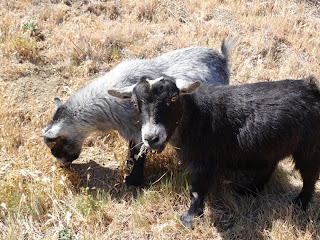 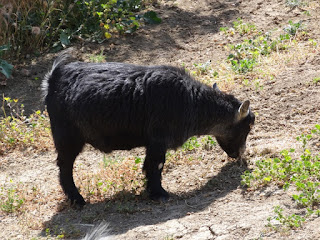 Marley is a sweet and loving fellow who begs for scratches on his head and will follow you anywhere. Oliver was raised as a bottle baby and enjoys eating more than the typical goat. He is an independent fellow who would do best with another dominant who can hold his own at feeding time.
They are accustomed to being let out around the ranch to graze and play king of the mountain on slopes and hillsides. When it's time to come in, just shake the grain scoop and they'll come running!

FOR MORE INFORMATION EMAIL kimuhlich@wildblue.net
Posted by Amber Waves at 8:39 AM Links to this post

Posted by Amber Waves at 11:40 AM Links to this post In the photo above we are using our Phillips™ auto drench gun. Comes complete with a backpack design, which is greatly appreciated after just one use.
Drenching for internal parasitesAt Premier we deworm by drenching instead of injecting because it is:
"White" dewormers we suggest using are Safe-Guard® andValbazen®. Both dewormers are approved for treating goats. When drenching, we prefer to use the Phillips™ Auto Drench Gun . Our herds are large and this makes a tedious task much easier. For small herds, theSmall Flock Drencher and theAuto Syringe/Drenchers are effective. Always make sure to thoroughly clean the drencher after each use.See all of Premier's Drenching & Vaccinating Products.
Posted by Amber Waves at 11:38 AM Links to this post

Posted by Amber Waves at 11:37 AM Links to this post

Smart Use of Goat Dewormer

Footrot in Sheep and Goats

Posted by Amber Waves at 11:31 AM Links to this post